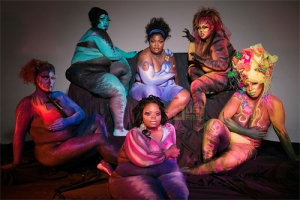 We live in an era where popular culture dominates media. From the films and television programs we absorb to the music videos that encourage us to call each other stupid hoes, African-American women are bombarded with images that are supposed to accurately depict us. For most black women, there exists a media image that represents us, even if that image only describes one aspect of our characters.

Vivica A. Fox, Gabrielle Union, and Halle Berry portray sexually charged characters in the films Booty Call, Two Can Play That Game, and Swordfish respectively, but this sexuality does not exist for overweight black women in media. Overweight African American women are considered unattractive, strong willed, and angry, so “[their] sexuality is purposefully excluded to present an image of fat as disgusting,” says Robyn McGee, the author of Can a Big Girl Get Some Love.

In 2009, Gabourey Sidibe exploded onto the A-list with her award-winning role as Precious Jones. Sidibe portrayed an illiterate, HIV-positive mother of two children conceived in incest. It was expected for Sidibe to be stripped of her sexual appeal because of the seriousness associated with her debut role according to the article, “As Big as Life.”

However, when Sidibe established herself as a confident plus-sized woman who wanted to further her career, media personalities including Howard Stern and Glenn Beck deemed her aspirations “impossible.” They didn’t think Sidibe would successful because of her weight. McGee asserts that these assumptions are common because plus size sexuality is often excluded from television and films roles. The images of obese women in media have never exuded sexuality or femininity.

Historically, larger black women were purposefully stripped of their sexuality in the media through images including the mammy, a character that materialized in the 1900’s. Mammies’ were usually darker-complexioned and obese domestic workers who were dressed in moo-moos with colorful headscarves according to the documentary Ethnic Notions.

Mammies were often stripped of their sexuality and forced to wear unattractive garbs to prevent them from being considered competition the mistresses of the family they served. Actress Hattie McDaniel often portrayed the “mammy” in the movies she co-starred in. In her roles as a domestic worker in The Little Colonel and her Academy Award-winning turn as the character, Mammy, in the classic film Gone With the Wind, McDaniel’s characters were often strong-willed, pleasant, and completely devoid of sexuality.

Times have changed; the sexual revolution has come and gone, so there are some plus-sized African American actresses including Queen Latifah and Kym Whitley who are selected for roles that display them as confident in their sexuality e.g. Latifah as Charlene in Bringing Down the House and Whitley in the role of Sugar in Next Friday.

Even with the inclusion of Queen Latifah and Kym Whitley in this sexual revolution, plus-size black women’s sexuality is not well received in media. Mo’Nique prides herself on both exuding sexuality and promoting femininity. In numerous interviews, Mo’Nique has identified herself as a “sex symbol” and icon for all plus-size women. Her statements were controversial; Barbara Walters even questioned if there were underlying causes for her “overconfidence in her attractiveness.”

Similarly, when Lane Bryant, a clothing company catering to plus-sized women, released an advertisement for their Cacique lingerie collection, it was removed from primetime slots on Fox and ABC because it was deemed too provocative. The advertisement was pulled because it was considered too lewd for children, but with ABC airing Desperate Housewives, which often features intimate scenes between characters, several articles raised the question of whether the removal of the ad was really due to excessive raciness.

Unfortunately, this is the normal response because there are few images in the media that depict obese women as sexual. The Dove Campaign for Real Beauty attempted to alter this perception by producing a media campaign using women of various sizes and complexions to promote healthiness and diverse beauty.  As with the Lane Bryant advertisement, Dove was attacked in the media by Bloomberg Businessweek, Women in Media News, and other publications for using the media campaign to promote unhealthy imperfections in women.

Many plus-sized African American women are pressured to lose weight to improve their health and image. Toccarra Jones was an aspiring high fashion model who appeared as a contestant on Tyra Banks’ “America’s Next Top Model.” While participating on “America’s Next Top Model,” Banks chided Jones on several occasions for gaining weight.  On episode four of cycle three, Jones failed a challenge because the designer did not provide clothing for women larger than a ten.  In episode five, Jones was eliminated after a similar incident.

Five years after “America’s Next Top Model,” Jones has dwindled considerably and has appeared on the covers of several men’s magazines including KING and Maxim.  Several other plus-sized black women in entertainment have followed suit including Mo’Nique, Oprah Winfrey, Starr Jones, Jennifer Hudson, Jill Scott, and others.

Ultimately, plus-sized African American women, including Gabourey Sidibe, are presented with two options when considering careers in entertainment: lose weight or be completely stripped of their sexuality in their roles on television and in film.

Will we ever be represented?

2 thoughts on “Gabourey Sidibe, Mo’Nique and the Misrepresentation of Overweight Black Women in Media”