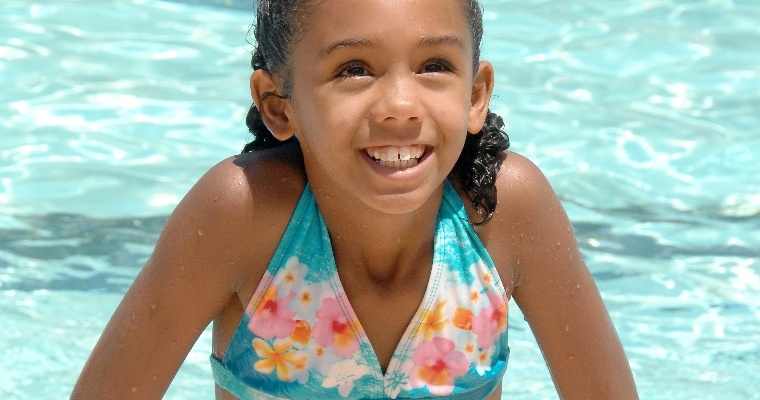 Before I had a concrete understanding of how dangerous the world is, I was a precocious child, exploring the curiosities of life through amazing adventures. Though I had tons of friends to host teas and Sesame Street parties with, I was still an anomaly in my diverse neighborhood. Having two parents and a middle-class income didn’t separate me from other children in the area; swimming did.

I loved the water! An eight-year-old black girl diving into 12-feet was a normal sight at the local pool. I coasted through rigorous swim tests to gain elite access to the “deep end,” a privilege that I used often. For me, swimming was second nature; my brother was an excellent swimmer as well. But the other kiddies in our neighborhood were terrified of water. Though I attempted to convince other children to partake in the slide that threw me into the 10 feet, none of them were interested. Instead, they sat poolside in neon-colored life jackets as I cannonballed time and time again.

Often, my mother recalls how amazed she was at my confidence in water – and how much I irritated her as I begged for another 10 minutes of swimming. Gliding like a silk log from one end of the pool to the other without a life vest, I couldn’t imagine summers without the neighborhood pool. Even when thunderstorms threatened to ruin the afternoon fun, I still pleaded with mom and dad for a few extra minutes. 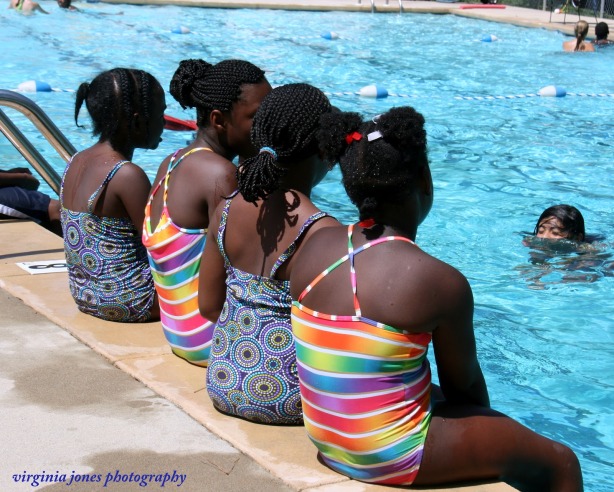 Until … the chlorine ruined my tresses. My luscious locks, already damaged from relaxers designed to tame its unruliness, were demolished by the chemicals in the beloved pools that I frequented. As a child, I cared more about fun than fashion and health, but it was traumatic for my mother, who spent hours attempting to comb through my shrunken pigtails. Swimming went from carefree afternoon bliss complete with a nap afterward to constant showers, hair washing, and pressing; all to protect what was left of my childhood ‘do.

Even in all of this madness, I never lost the passion for swimming. For a brief time, I even competed – until writing and television became more intriguing than practicing for the 400-meter freestyle. But, as each spring transitioned to summer, I was still the first black girl diving in the local pool.

This tradition continued through college, even as more of my sister-friends begged not to be splashed, as they enjoyed the clear water on their toes and ankles. Rather than participating in their daintiness, I immersed beneath the water, relaxing and reliving those precious childhood moments where I spent entire afternoons in the pool. Now, I even take the extra step of protecting my (now) natural afro by wearing braids or twists in the summer, so I can swim once-a-week from Memorial to Labor Day.

When other black female children were uninterested in swimming when I was eight, I chalked it up to the woes of childhood. But as I watched these black kids evolve into black women, terrified of swimming, cruises, scuba diving, and all other water-related activities, I realized that there was a direct correlation between hair and the water for black women. Although summertime swimming is a privilege that we only have access to for three months, I understand that my aficionado for the water is abnormal, since I am much more concerned with flipping from diving boards than maintaining a sleek bob.

I knew there was a large gap between white women who swim and black women who prance around the pool in bikinis. But I didn’t recognize how wide this margin is until it hit the news last week that Lia Neal, a 17-year-old New Yorker, qualified to compete for the United States in the 400 freestyle relay at the 2012 Olympic games.

Though Neal is of mixed-heritage, she will be written in the history books as the second black woman to be accepted to the national swimming team for Olympic competition. The first black woman elected to the U.S. Olympic swim team was Maritza Correia in 2004. She left the games with a silver medal in the 4×100 freestyle relay.

Of course, Lia was honored. She told the Associated Press that she was proud of her accomplishment and that she realizes how “cool” being the second African American female competitor is. All Americans are proud of Neal. She is a culmination of the “American Dream,” where ascertaining our wildest dreams is as simple as basing judgments on character instead of complexion.

This concept was contextualized in a recent conversation about the importance of recreation in childhood. This led to a debate about whether it is safe to teach children to swim or if parents should allow their offspring to discover the water on their own. As the avid swimmer, it was natural for me to suggest that all children should be thrown in the pool because it instills confidence and autonomy. But a lot of my peers disagreed (all of the naysayers are petrified of water and were never taught to swim). One friend even suggested that her children should consider new hobbies because swimming wasn’t going to be “their thing.”

And maybe that generational inheritance of fear of chlorine and its’ damaging effects on our hair has kept black women from embracing the water. Our lack of representation in swimming can be attributed to a deep stigma that our hair is our crown and we must cherish it at all costs or to the fact that pools aren’t common in urban communities. But regardless of the reason, black women have to circumvent this fear and step into pools as we step into life – strong, balanced, and capable of putting the world on our backs without complaint.

When Lia Neal hits the pool at the Olympics, she will be shedding the inhibitions of legions of black women who value weaves above freedom and avoid chlorine as if their lives depend on it. Though she is the second black woman competing, let’s hope Neal isn’t the last. We must break traditions to break records. We’ve done it with the presidency. Now, it’s time to demolish the diving board separating us from greatness and start swimming!

This article was cross-published on Racy Girl, a “commentary about colored women stuff when other blogs aren’t enuf.”