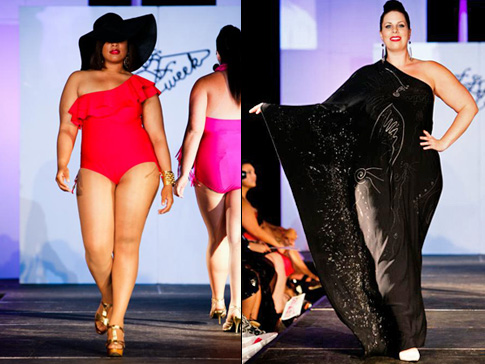 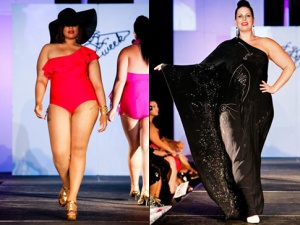 The initial excitement was beginning to calm. Though the thrill of attending Mercedes-Benz Fashion Week in New York still jolted me occasionally – especially when I stepped off the elevator backstage at Levi’s – as waiflike model after paper-thin model walked down the staircase at the Rubin Museum of Art during the Josie Natori presentation, I began to realize – I was the sole large woman in the room.

At first I didn’t mind; after all, I knew that Monif C. and other popular full figured clothing designers weren’t unveiling fall 2012 collections this Fashion Week. But, to not be represented at all from Carmelita Couture to bebeBLACK was disheartening. I love seeing large, confident, and beautiful women grace the catwalk – and disappointingly, this void was not filled. Even Tocarra Jones, the “go-to” plus-sized model was absent.

But this blatant exclusion of women whose large hips and wide waists represent more women than frail supermodels is a reflection of the overall culture of the fashion industry.

The fashion business – which once proclaimed supermodel Tyra Banks “too large – is notorious for excluding larger women. According to a 2006 USA Today article, most runway models weigh an average of 120 to 124 pounds and are between sizes 2 and 4. Models weigh 23 percent less than the average female and 50 percent of these models are underweight. Though these statistics are alarming, it hasn’t kept industry professionals including People’s Revolution owner, Kelly Cutrone, from proclaiming that these standards are necessary for the fashion industry to sustain.

“Runway models have to have a certain look, Cutrone explains in the USA Today article. “The runway models this year were no thinner than years before, she says. “I didn’t see any difference in the girls at all. When they bend over, are you going to see the rib cage? Yes, they are thin naturally. Women shouldn’t be comparing themselves with these girls. These girls are anomalies of nature. They are freaks of nature. They are not average. They are naturally thin and have incredibly long legs compared to the rest of their body. Their eyes are wide set apart. Their cheekbones are high.”

“If we get a girl who is bigger than a 4, she is not going to fit the clothes,” she continues. “Clothes look better on thin people. The fabric hangs better.”

Thanks for making me feel better about my appearance Ms. Cutrone.

According to the Science News article, women between the ages of 18 and 34 have less than 1 percent chance of ever being as thin as a supermodel which makes this standard of beauty unrealistic. But with the media perpetuating these images as ideals of beauty, heralding fashion models as the standard makes it nearly impossible for large women to create an ideal of beauty for themselves because we don’t see a representation of ourselves at Fashion Week.

Sarah Murnen, body image researcher says, “The promotion of the thin, sexy ideal in [our] culture has created a situation where the majority of girls and women don’t like their bodies.”  The media continues to perpetuate the “thin ideal” promoted by the fashion industry as the level of beauty that each woman should aspire to attain. Go figure.

So, no, I didn’t come to Fashion Week expecting to see size 18 hips dominating the catwalk (though that would have been a welcome change of pace), but being the largest woman in the room forced me into the “sore thumb” position. How uncomfortable is that?

As I bid adieu to New York and all that is Fashion Week, I kept telling myself “maybe next year.” Let’s hope fashion realizes how significant large women are and incorporate us in next year.

I vote YES for diversifying fashion.

One thought on “Fashion Week Mania – No Big Girls”